In my previous blog post, I explored some of the early ways of word embeddings and their shortcomings. The purpose of this post is to explore one of the most widely used word representations in the natural language processing industry today.

Word2Vec was created by a team of researchers led by Tomas Mikolov at Google. According to Wikipedia,


Word2vec is a group of related models that are used to produce word embeddings. These models are shallow, two-layer neural networks that are trained to reconstruct linguistic contexts of words. Word2vec takes as its input a large corpus of text and produces a vector space, typically of several hundred dimensions, with each unique word in the corpus being assigned a corresponding vector in the space. Word vectors are positioned in the vector space such that words that share common contexts in the corpus are located in close proximity to one another in the space.

Let us look at the equation proposed by Mikolov,

As we can see from the equation, it is nothing but a softmax equation.


Intuitively, we can visualize the model as follows. The main operation being performed here is that of dimensionality reduction. We have seen the usage of neural networks for dimensionality reduction in auto-encoders. In auto-encoders, we trick the neural network to learn compressed representations of vectors by providing the same vector as both input and target. In this way, the neural network learns to reproduce a vector from a compressed representation. Hence, we can replace the high dimension input vectors by their lower dimension hidden activations (Or weight matrices).

Similarly, in Word2Vec we trick the "neural net" to learn smaller dimensions representations of the huge dimensioned one hot vector.

Graphically, the model can be visualized as follows: 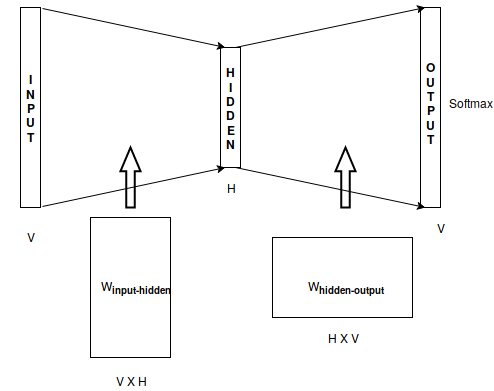 There is a distinct difference between the above model and a normal feed forward neural network. The hidden layer in Word2Vec are linear neurons i.e there is no activation function applied on the hidden activations.

Also, we can see that the dimensions of input layer and the output layer is equal to the vocabulary size. The hidden layer dimension is the size of the vector which represents a word (which is a tunable hyper-parameter).

Now, let us take an example in order to understand this better and we'll go through each layer separately.

"The night is darkest just before the dawn rises"

From the above corpus we can see that the vocabulary size is 8.
For simplicity, let us make the following assumptions:

The initial one-hot representations will be

Since the input is a one-hot vector, the hidden activation is just a lookup operation. That is, hidden activation just looks up the row corresponding to the word ID in Winput-hidden and passes it on to the output layer. As an illustration,

Since the output layer is a softmax layer, it produces a probability distribution across the words. Thus, the categorical logloss is calculated (and since this is a softmax, the error is just the difference between the target vector and the output vector). This error is then back propagated to the hidden layer.

As you might have noticed, this procedure gives us two trained parameters. The Winput-hidden and Whidden-output. Usually, Whidden-output is discarded. 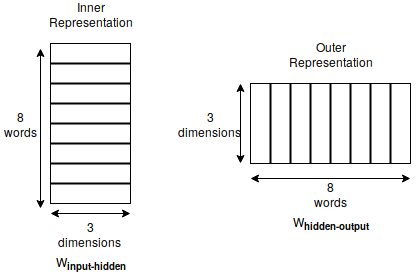 Why does this work?

This method accomplishes dual task of reducing the dimensionality and adding semantic meaning to the word. How?

Let us take 2 pairs of words. ('Computers', 'ML') and ('NFL', 'Kobe'). If we look at the above pairs, we can see that 'Computers' and 'ML' occur in the same context in the corpus. Hence, the representations of the words 'Computers' and 'ML' will be very close to each other (cosine similarity). Whereas, there is no way 'NFL' would be a part of a discussion about 'ML' (Although there is a Kobe challenge on Kaggle, which we are assuming is absent from the corpus) and hence the similarity between them will be very low. Since the context will be similar to 'Computer' and 'ML' and 'NFL' and 'Kobe', the neural net is forced to learn similar representations for each of these pairs.

Here are some of the resources where you can find the detailed mathematical derivation for Word2Vec:

Sujay S Kumar
I am a Machine Learning Engineer solving language problems for a billion Indians at vernacular.ai. I am passionate about Data Science and it's potential to disrupt hitherto unexplored industries. I am an avid reader, blogger, developer and a Quora addict. I dabble in various activities like blogging, debating, event organizing and trekking.